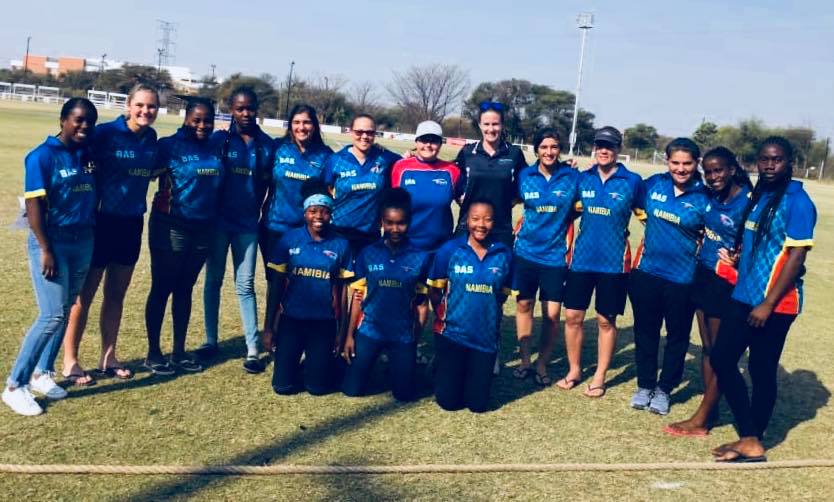 The ladies performance in Botswana

Namibia’s performance in this tournament has been exceptional. The Namibian Senior women have been in the top two from the onset of the tournament.

Namibia won the toss and selected to bowl first. Malawi made 52 runs in 20 overs lost 9 wickets. Good bowling performance by the Namibian Ladies, Kayleen Green was the Top bowler with 3 wickets in 4 overs and giving only 11 runs.

The Namibian Ladies had good batting which lead them to winning the match in the 5th over. Yasmeen Khan opening batsman not out with 23 from 14 and Adri vd Merwe not out with 22 from 16.

Player of the Match was awarded to Kayleen Green for 3 wickets for 11 runs in 4 overs.

Player of the Match was awarded to Adri vd Merwe with 28 runs of 28 balls.

Mozambique won the toss and elected to bat.

Namibia had strong bowling attack, which limited Mozambique batsmen to all out in the 18th over with 25 runs on the score board. Namibia opening batsmen finished the match in the 3rd over.

Player of the Match was awarded to Namusha Shiomwenyo for her 3 wickets in 3 overs giving only 6 runs.

Lesotho won the toss and elected to bowl. Namibia scoring 210 runs in 20 overs with brilliant partnership of 101 runs between the two openers Yasmeen Khan & Adri vd Merwe. Namibian bowlers once again showed their strength and restricted Lesotho to only 31 runs. Brilliant bowling from Constancia Kauripeke 3 maiden overs 1 wicket. Player of the match awarded to Captain Yasmeen Khan for batting 61 runs of 33 balls with 11 fours.

Man of Match was awarded to Captain Yasmeen Khan for batting 61 runs of 33 balls with 11 fours.