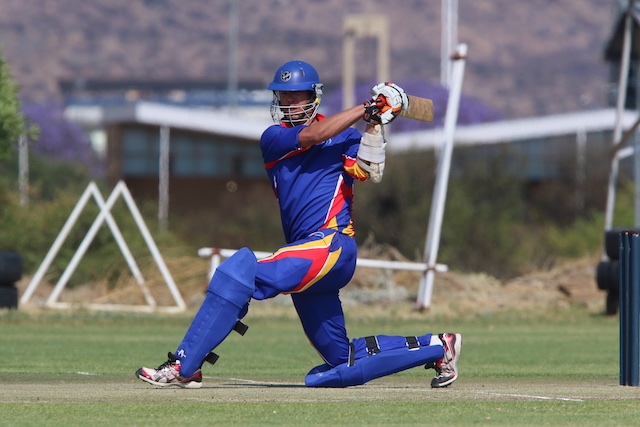 GERRIE Snyman has been one of Namibia’s outstanding cricketers over the past two decades.

He scored just under 10 000 runs in all formats of the game to rank second behind Craig Williams on the all-time Namibian list, but he was definitely Namibia’s most explosive batsman, scoring some brilliant innings’ along the way.

His highest score of 230 against Kenya in 2008 was probably the most astonishing knock, as he dominated Namibia’s innings, scoring 81,56 percent of the team’s total of 282. That was, in fact, the second highest in first class history, just behind the 83,43 percent achieved by Glenn Turner, who scored 141 not out, out of 169 for Worcestershire against Glamorgan in 1977.

In another blistering knock just two months before, at the World Cricket League Division 2 series in Windhoek, he scored 196 off only 113 balls against the UAE, which included 17 sixes, which was then a List A world record.

There were many more fantastic knocks when he single-handedly changed the course of a match, and when he retired from first class cricket he did so in style, hitting 101 off only 77 balls against Kwazulu Natal Inland on 15 February 2018.

In total, he played more than 250 matches for Namibia, while he also played professionally for various clubs around the world from England and Scotland, to the Netherlands and New Zealand.

After his international retirement, Snyman continued playing for Wanderers last season, before he moved to Swakopmund where he is currently running a sport academy.

Snyman talked to the Namibian Sport about the highs and lows of his career.


Who was your sport hero as a child?

It was definitely my dad, Tol Snyman, who was a great cricketer. He got me to fall in love with cricket, while he made a lot of sacrifices to make sure that I could follow my dream of becoming a professional cricketer.

He hit the biggest six I have ever seen and when I saw that I knew that I wanted to become a cricketer and hit the ball as far as my dad.

He supported me all the way, he took me to matches and to cricket clinics and academies and if it was not for him, I wouldn’t have had a career in this amazing sport.


Who was the best player you ever played with?

There are so many to pick from, but I must say, I had the privilege to play with Chris Cairns from New Zealand. He was great and took some time in the matches we played together to help me with my game.


Who was the best player you played against?

There’s no doubt about it, it has to be the little master, Sachin Tendulkar. It was a privilege and an honour to play against him and to see first-hand how good he was. It was amazing to see how he followed his game plan, how strong minded he was to play to his strengths, and how easily he manipulated the field. He was one of those players who made the game look so easy.

Who was the best coach you played under?

There were three – Dougie Brown, Andy Waller and Johan Rudolph. Dougie with his amazing game plans; the hard as nails Andy, who taught us how to think as cricketers; and Johan with his amazing people skills. All of them had one thing in common, they always put their egos aside and put their players’ interests first, and they knew how to get the best out of their payers.

What was your most memorable match?

It was our first international against England in Windhoek in 2004.

We had a huge crowd of Namibians cheering us on, while it was my first 50 against a world class side. I’ll never forget, I hit Ian Bell over the sight screen for six, which smashed the car window of our chairman of selectors, Francois Erasmus. He even said I could have the car and fix my own window if I hit a century, but unfortunately I was out for 75

What was the highlight of your career?

The first time that I got a full contract and realised that I could play cricket professionally and make a career out of it. And then, definitely, the 2003 World Cup – to be able to play against the best in the world, to see how good they are, and how hard we have to work to reach that level.


And the low light of your career?

Every time we worked and played as hard as we could at World Cup qualifiers and then not qualifying. It was heartbreaking, to know you did your best and to get so close every time, but it was not meant to be.