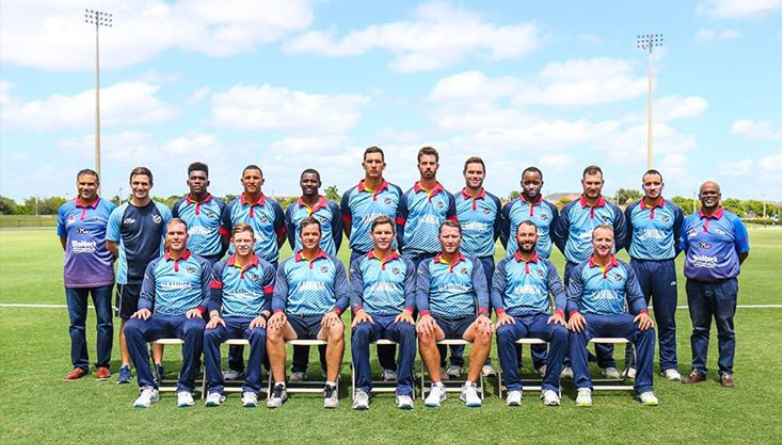 Namibia Bounce Back With Two Victories

AFTER losing their opening match against the United States, Namibia bounced back with two successive victories at the Cricket World Cup League 2 tournament at Lauderhill, Florida over the weekend.

On Friday they struck back with an emphatic 139-run victory against the United States, while they beat Papua New Guinea by four wickets on Sunday.

These results have seen them moving in touch with the leaders and if they beat PNG in their final match on Monday night they could possibly even go top of the log.

Scotland, the United States and Oman lead the log on six points each, followed by Namibia on four points, while PNG are still on zero.

If Namibia beat PNG on Monday night they would join the top three on six points, while they could even go top on nett run rate, since Namibia’s run rate of 0,53 was just behind that of Scotland on 0,556.

On Sunday, JP Kotze scored a brilliant century to put Namibia in control in a rain-shortened match.

After the early dismissal of Karl Birkenstock for a duck, Kotze soon took control with a great innings. He dominated a second wicket partnership of 97 runs with Stephen Baard who only contributed 18 before being dismissed, and then shared a 78-run partnership with Gerhard Erasmus who contributed 20.

Kotze was eventually dismissed for 136 off only 109 balls, including eight sixes and 11 fours, and with the total at 178/3 with nearly half their overs remaining they were well set for a big score.

After a rain interlude the target was revised to 282 from 47 overs, but the United States never got close and were eventually all out for 142.

Zhivago Groenewald was Namibia’s stand-out bowler with five wickets for 20 runs off eight overs, while Pikky Ya France took 2/31 off nine overs.

On Sunday, some tight bowling and a fine innings by Namibian captain Gerhard Erasmus paved the way to a comfortable victory against PNG.

PNG were restricted to 219/8 off their 50 overs, with Groenewald once again the pick of the bowlers, taking 3/46 off nine overs, while Frylinck took 2/29 and Bernard Scholtz 2/26.

In their run chase, Namibia got off to a hesitant start after losing the wickets of Baard (22) and Birkinstock (10), but Erasmus and Kotze regained the initiative with a 124-run partnership.

Kotze was first to go for 43, while Green was dismissed cheaply for one, but Erasmus had taken charge of the bowling and seemed set to reach his century before he was caught on the boundary for 88, which came off 100 balls and included three sixes and 10 fours.

Craig Williams kept Namibia on track with 36 not out to take them to victory with 10 balls remaining.