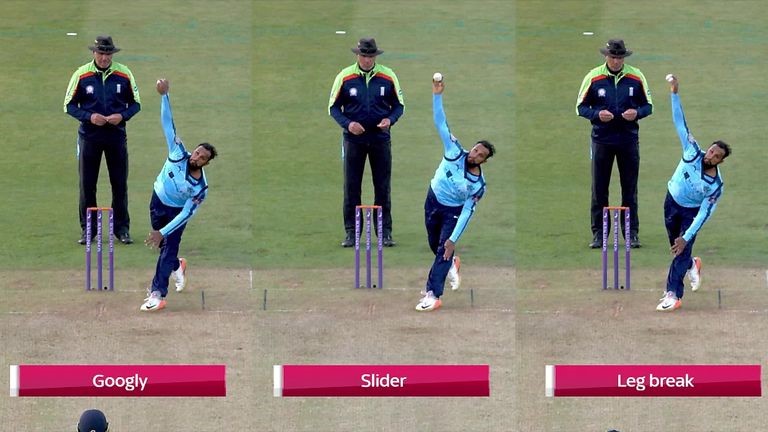 How to Bowl Leg Break?

Leg break bowling is one of the hardest cricket skills to master. Getting the ball to spin is one of the most challenging parts of it, but many bowlers also struggle with their accuracy and speeds when bowling these deliveries! A bowler who can master these three aspects of leg break bowling should be well on their way to success in the game of cricket.

What Grip Is Used When Bowling the Leg Break?

The grip needed for the leg break is commonly referred to as the ‘Two up, two down’ grip. This means that two fingers of your bowling hand (index and middle fingers) will be on top of the ball with the seam running across them, whilst the ring finger and little finger will sit alongside the ball for support.

What Does A Typical Run Up Look Like for Leg Break Bowlers?

The approach to the crease for a leg break bowler is much shorter than it is for a fast bowler. The purpose of a spin bowling run up is to build up a small amount of momentum, so that when we reach the popping crease, some of this momentum can be used to propel the ball towards the batsman!

All spin bowlers will have a different approach to the crease, no two are the same! It is for this reason that I can’t give you an exact process to follow…but what I can do is highlight some common themes that exist within the run ups of many different professional leg break bowlers! Hopefully these will give you a good starting point!

Most leg break bowlers will have a run up to the crease which is around approximately 5 – 10 paces in length.

The Gather: Both hands should be in front of the body and the weight should be moving forward. There is no rock back as in seam or swing bowling.

Back-Foot Landing: The back foot must land parallel to the bowling crease. The hips and shoulders are aligned towards the target.

Delivery Stride: As a rule, the delivery stride should be a little more than shoulder width. The head should lead the shoulders, hips and non-bowling arm directly towards the target.

Front-Foot Landing: The front foot should land firmly on the ball of the foot with the weight well forward and the leg braced. The back and front heels should be aligned, and the front toe should be pointing toward fine leg, to help form a stable base. The front arm should be pushing out hard towards the target.

The Release: The weight should be over a braced front leg with the release position of the bowling hand at approximately 30 degrees to the vertical. The bowling wrist should un-cock (unlock) with the palm of the hand facing the batsman.

Follow-Through: If all the other aspects of the action are correct, the shoulders and hips will drive powerfully through with both arms coming across the body to complete a 180-degree rotation.

How Is Spin Applied to The Leg Break?

Now for the most crucial bit! How do we actually get the ball to spin when it hits the pitch? Luckily, the answer is quite simple. But it still requires a lot of practice to get right! Let’s look at the process below:

Where to Pitch The Leg Break

Some of you may be asking where we should mainly be looking to land the leg break! The answer to this depends on several factors, here are 5 for you to consider:

What Speed Should the Leg Break Be Bowled At?

A lot of leg break bowlers have questions about what sort of speeds they should be trying to bowl at. At the professional level, most leg break bowlers will bowl at a speed somewhere in the range of 70-95kph (45-60mph). Obviously if you are a younger bowler there is a good chance that you may bowl slower than this.

If I was just starting to bowl leg spin, I wouldn’t worry too much about the pace that you are bowling! Just focus on getting the ball to spin consistently, and work on your accuracy. Once you have these things more finely tuned, you can begin experimenting with the pace of your leg break. As a rule though, you should guard against trying to bowl the ball too fast. Some spinners have this tendency, especially when they don’t want to get hit for boundaries! Many of them think the solution is to fire the deliveries in a lot quicker, but trust me, this really isn’t necessary! Doing this can also take our focus away from trying to spin the ball, which should be our primary aim! Sometimes, spin is a lot more effective when you bowl the ball a tad slower and ‘toss the ball up’. Tossing the ball up is often also referred to as ‘getting the ball above the batsman’s eyeline’, and it basically refers to how high the ball we get the ball during its flight. Getting the ball above the eyeline of the batsman can cause them to misjudge the length of the ball. This is just another method that leg break bowlers can use to dismiss a batsman.

How Do You Get A Leg Break To Drift?

The term ‘drift’ describes the way some spin bowlers can get the ball to move laterally in the air before it pitches. This means that if a ball is originally bowled on an off-stump line, it could potentially drift in towards the leg stump before pitching and spinning away. The ball can drift in either direction, and there are a few factors I’d like to briefly explain that can help us get the ball to behave in this way!

A combination of these three factors should allow you to drift the ball. Drift can be deadly and allows us to confuse the batsman and force them into mistakes before the ball has even pitched! Again, if you take any one thing away from this section make sure it is the fact that drift largely comes down to the number of revolutions you can get on the ball. If you teach yourself to spin the ball a lot, you can get all sorts of associated benefits such as this!

I hope this post has inspired some quality leg break bowlers of the future! This post contained all of the tips and info that you will need to bowl a good leg break! However, most of you are probably aware that spinners don’t just bowl one type of delivery! Many of them have multiple different ‘variation’ deliveries that they can use to trick batsmen. Some of these will bounce more, some will be bowled quicker, and some will spin in different directions!