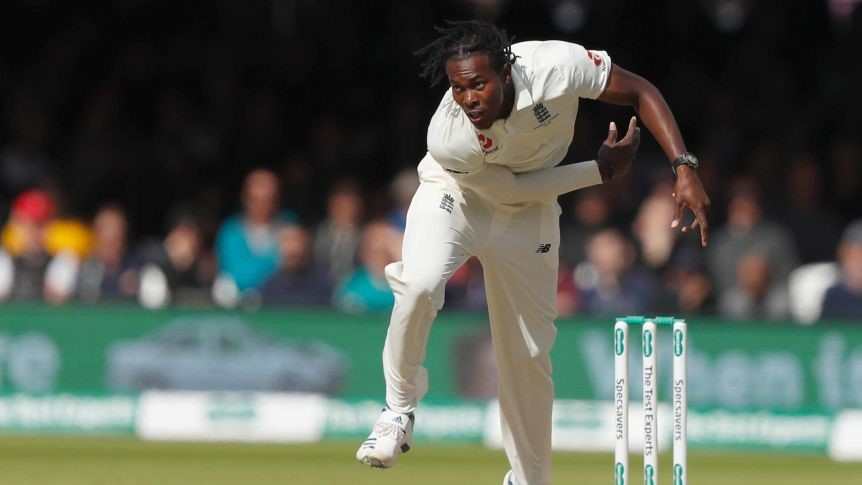 A batsman facing Jofra Archer in full flight has just 0.25 seconds to decide what to do

Archer’s deliveries regularly topped 150 kilometres per hour. His fastest ball in that spell on day four was more than 155kph.

The 73rd over of the second innings was the fastest ever recorded by an Englishman in Test cricket, at an average speed of 149kph.

Then comes that horrible moment. It’s another ball just short of a good length, which bounces sharply. As Smith turns to tuck off his hip, the ball is suddenly on him.

For once, Smith is no longer in control. He’s not playing a shot. He’s not even looking at the ball as it slams into his neck.

Steve Smith receives treatment after being hit by a Jofra Archer bouncer during the second Ashes Test.

It was just too quick.

How much time did he have to react?

The science behind batting

A new and unpublished study by the University of Sydney’s lecturer in sports biomechanics Dr Rene Ferdinand’s and his PhD student Gerard Dias provides the answer.

When the ball leaves the bowler’s hand at 150kph (the speed recorded by the radar), it takes 0.48 seconds to arrive at the batsman.

But it takes 0.2 of a second for the batter to pick up the flight of the ball — what’s known as “perception time” — during which he or she is effectively “instantaneously frozen”, according to Dr Ferdinand’s.

That leaves just 0.28 seconds to decide what shot to play and to then move into the correct position.

At that speed the batter has just 0.25 seconds to react.

The coach of the NSW Breakers and former NSW cricket captain, Dom Thornely knows what that’s like.

“I’ve faced Shaun Tait many times, he’s still in my nightmares,” he said.

“At that speed, the ball is just a blur.”

Thornely remembers facing Tait in a Sheffield Shield game at the Adelaide Oval.

“The first three or four balls literally just hit my bat. I said to Greg Mail batting at the other end, ‘I honestly don’t think I saw that’.”

The question of how a batsman can prepare to face such extreme speeds is what prompted Dr Ferdinands, who has worked as a consultant coach to international touring teams, to conduct his research with Mr Dias.

He believes young players aren’t being taught how to play fast bowling properly.

“The key thing here was to determine the most effective way to prepare at the instant of release, so that footwork forward and back can be made as quickly and efficiently as possible,” he said.

Dr Ferdinands wanted to see how leading batsman like Smith seemingly had more time to play the ball.

Under lab conditions, Dr Ferdinands wired up batsman and measured their every movement.

He found there were two crucial ingredients to deal with fast bowling.

The first is what he calls a pre-routine: the ability to get in the right position just before the bowler bowls, “like a cat ready to pounce”.

The second is being balanced on both feet so the batsman can push either forward or back.

“He has to learn how to position himself before the ball is bowled to enable him to play back and forward efficiently, otherwise you can’t hit it,” Dr Ferdinands said.

“You have to learn how to use the ground.”

Smith’s famous back and across movement just before the ball is bowled sets him up perfectly to react.

“Smith has worked out a pre-routine that works for him,” Dr Ferdinands said. “It was a complete radical change,”

“Number one, he’s back and secondly he’s doing a few of these things right with respect to the forces, his head position and centre of mass.”

And yet, as we now know, even Smith is fallible.

“You only have to make the slightest hesitation or the slightest miscalculation. It just shows what a fine margin you have,” Dr Ferdinands said.

“They always say the line between mediocrity and genius is a fine line. The line between getting hit at the elite level and avoiding the ball is an even finer line.”

The difference between a ball bowled at 140kph versus 150kph is just three hundredths of a second, and yet Thornely believes there is “a huge difference”.

“It probably feels like you’re two metres closer,” he said.

As a player and then batting coach for the NSW team, Thornely said he had to develop an entirely new method of batting against extreme pace.

“The textbook many years ago talked about footwork being the essence of batting,” he said.

“You don’t have time to be able to move your feet accordingly, so then the batting techniques have changed to being around transfer of weight versus footwork and getting your head, and probably more the top half of your body, into a good position to hit the ball rather than the bottom half.”

Now he teaches batters to widen their stance and use the top half of their bodies to sway into the correct position and move their weight through the ball on contact.

It’s in stark contrast to the traditional method of teaching batters to get on to the front foot.

Dr Ferdinands said modern coaches should also look to the greats of the 1970s and ’80s such as Allan Border, who was exceptional at swaying out of the way of the short-pitched bowling he faced against the fearsome West Indian attacks of that era.

“We have to understand, and it’s one thing coaches don’t like to hear, that from a biomechanical point of view those cricketers from the ’70s to perhaps the early ’90s had technically superior techniques to what we’ve had in the last 15 to 20 years,” Dr Ferdinands said.

But even the best technique in the world isn’t foolproof. Against extreme fast bowling nothing is.

The essence of great Test cricket is the battle between bat and ball.

And when Archer is sending them down at 150kph, every hundredth of a second counts.