The Female Pace Race: Who Will be the Fastest of Them All?

Sharon Tredrea, inducted into the Australian cricket hall of fame earlier this month, played in an era well before ubiquitous speed guns in women’s cricket. However, the all-rounder, whose international career spanned 15 years in the 1970s and 80s, used to train with men at North Melbourne, claiming she was once clocked at around 83 miles per hour, which is 133.6 kilometres per hour.

Famous international umpire Dickie Bird later verified that Tredrea bowled within that sort of speed range. But there is no way of definitively knowing how fast Tredrea really bowled. 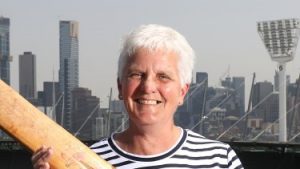 Only in recent years have female fast bowling speeds been recorded consistently. Australian great Cathryn Fitzpatrick, who intimidated opposition batting line-ups in the 1990s and 2000s, was once recorded at 120 km/h during an exhibition event at the MCG but is adamant her best was around 125 km/h. The Women’s Twenty20 World Cup will showcase some of cricket’s modern-day speed demons.

South African Shabnim Ismail was recorded in 2016 at 128 km/h, while New Zealand quick Lea Tahuhu has hit the 126 km/h mark. Australian young gun Tayla Vlaeminck hasn’t quite hit that mark but is clearly her side’s fastest and regularly clocks in excess of 120km/h, while national teammate Ellyse Perry has also entered the low 120s during her decorated career.

So, what are the ingredients behind a female quick?

Genetics clearly play a part. As Perry and Australian team fast-bowling coach Ben Sawyer both acknowledge, young gun Vlaeminck – sadly ruled out of the tournament this week with a foot injury – is unusually flexible, which Sawyer says is one of the reasons the Victorian has regularly been struck down with injury. But they also point out that Vlaeminck bowls with serious intent to reach great speeds and runs in faster than any of her teammates.

Sawyer and former Australian head coach Fitzpatrick – who remains a coach in the Victorian pathway system – say that attitudes towards fast bowling in women’s cricket have changed. Whereas in the past control and accuracy have been prioritised, pace is now king, in part to keep up with the improvement across the board in batting.

“You never tell a spinner to stop spinning it,” Fitzpatrick said.

“A lot of the times we try to slow kids down because they’re not consistent, and that’s the absolute opposite of what we want to do. It’s a lot easier to coach control than it is to coach speed.”

Sawyer agrees. “The simplest way to put it is we just want to encourage it. I think for too long in the women’s game, we spoke about accuracy and you could really tie down a batter with a slow/medium-pace bowler and to some extent that still works,” he said.

“But I think we want to get way past that, encouraging the girls just to bowl as quickly as they can and be happy when they make mistakes doing that, but knowing that’s pushing the game forward.”

“I think it’s certainly evolving, and I think in the coming years there’ll certainly be an emphasis on pace, pure pace, becoming a bigger factor in the game,” Perry said.

“The game wasn’t professional a few years ago, so you only had a limited time to work with players.”

While reverse swing is hard to generate given how little red-ball cricket female cricketers play, and the fact a ball is used from either end in one-day internationals meaning a ball never gets more than 25 overs old, Perry and Sawyer were adamant that variations and conventional swing played a crucial role.

“Now I think the more consistent you are in the women’s game actually works against you because batters have adapted,” Perry said.

While Perry noted that people tended to associate variations with changes in pace, she suggested that there was much more to it than that, with wrist position and crease angles playing a part.

So, how fast could a woman conceivably bowl?

English academic Paul Felton is a biomechanics lecturer at Nottingham Trent University who has worked with the England and Wales Cricket Board for the best part of a decade.

He says that while women will inevitably be restricted compared to men by height, strength and slower run-ups, there should still be scope for improvement.

“The knowledge around female cricket compared to male cricket is a lot more unknown,” Felton said.

“There was a review paper published in 2018 by Catherine Munro and Candice Christie from Rhodes University in South Africa which highlighted only nine scientific articles featuring female cricketers had ever been published – and five of these were looking at injuries. While this is improving, the number may have doubled in the last 18 months, it is going to take a while to catch up.

“Much of the research in cricket has been conducted on male cricketers due to the larger population worldwide compared to females. The relevance of the results to females is often ignored and recommendations coached uniformly. Recent research, in fast bowling, suggests that this approach might be wrong due to the differences between males and females from a physiological viewpoint.

“Our research suggests that the optimal bowling technique in females is currently limited by strength and flexibility. I suspect that 128 kph will be surpassed since as the professionalisation of the female game continues to see strength and conditioning levels increase but by how far is difficult to predict.”

For the moment, the likes of Ismail and Tahuhu hold sway.

But as Tahuhu told The Age during an interview in November, Vlaeminck – when fit – is the one to watch.

“I think I might still have her at the moment. But she’ll continue to hunt me down and no doubt she’ll overtake me at some stage,” Tahuhu said.