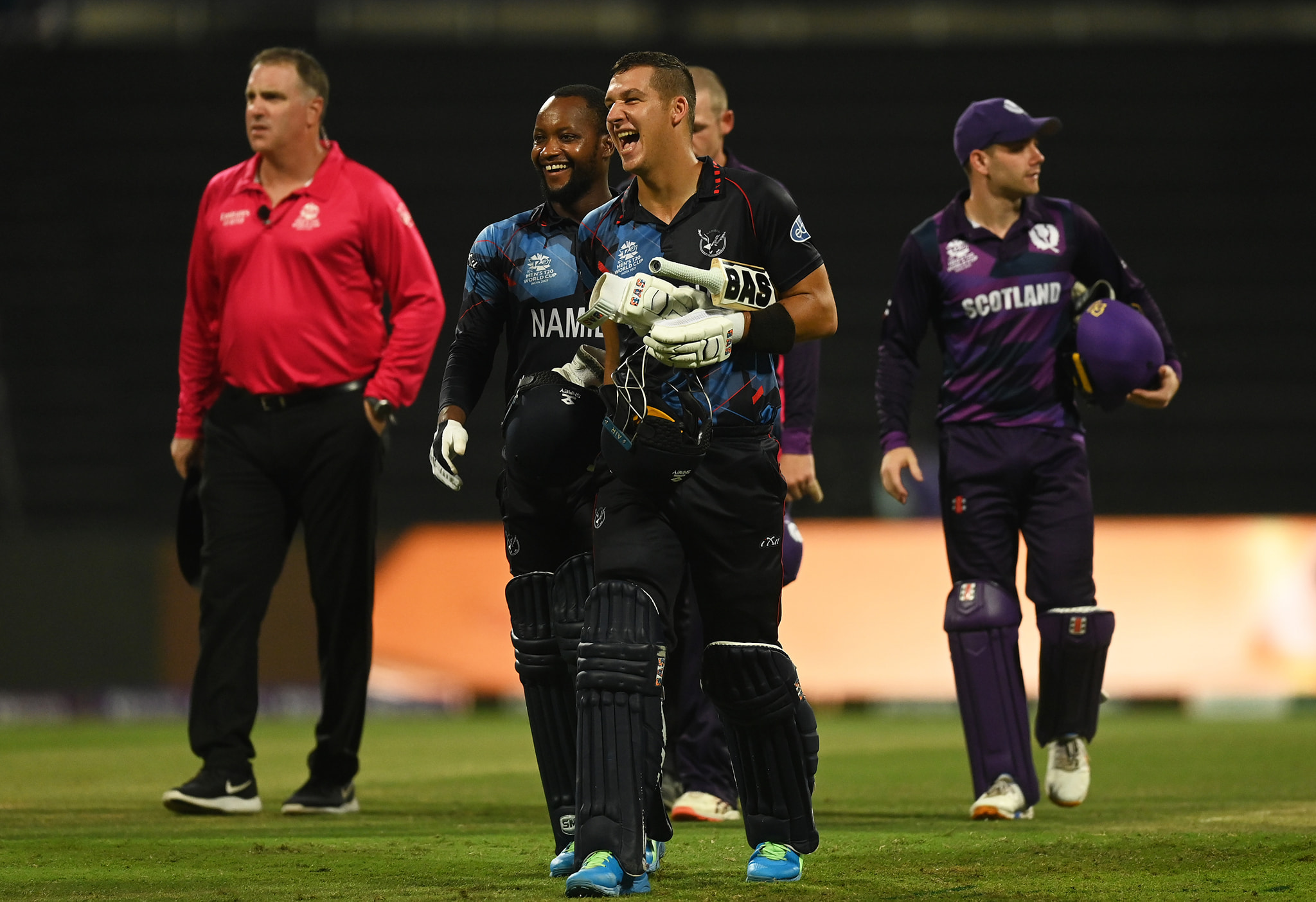 Namibia kicked off their Super 12 campaign in style with a four-wicket win over Scotland in the second match of the day at Zayed Cricket Stadium, Abu Dhabi.

Scotland fought back well after losing three wickets for two runs at the start of the match and took the game to the final over of Namibia’s innings, but JJ Smit ensured that the Eagles got across the line with four wickets and five balls to spare.

Namibia approached their chase with caution and, apart from a mini-collapse in the middle over, were in control of the chase throughout.Play VideoPlayMuteLoaded: 2.89%Remaining Time -5:40Picture-in-PictureFullscreen

Earlier, Namibia bowled splendidly at either end of the innings to restrict Scotland to a below-par total of 109/8. Scotland suffered an early setback as Ruben Trumpelmann’s triple-strike in the first over pegged them back.

Only Matthew Cross, Michael Leask and Chris Greaves reached double-digits for Scotland, with Leask leading the way in the middle-overs with a 27-ball 44.

Namibia skipper Gerhard Erasmus won the toss and opted to field first against Scotland in the Group 2 encounter of the ICC Men’s T20 World Cup 2021.

Scotland were without their regular captain Kyle Coetzer, who was out with a finger injury. Richie Berrington stood in Coetzer’s absence, with Craig Wallace replacing him in the XI. Namibia, on the other hand, were unchanged from their history-making win over Ireland that helped them qualify for the Super 12.

For the second game in a row, Scotland had a nightmarish start to their batting innings, losing three wickets in a single over.

It was Trumpelmann who caused the havoc this time around, scalping George Munsey, Calum MacLeod and Richie Berrington in the first over of the innings, all for nought.

Munsey dragged the ball onto his stumps off the first ball of the innings before Trumpelmann induced an edge off MacLeod’s bat with a peach of an inswinger. He then trapped Berrington in front of the stumps with another great inswinger to reduce Scotland to 2/3.Play VideoPlayMuteLoaded: 14.00%Remaining Time -1:11Picture-in-PictureFullscreen

Namibia continued to stifle Scotland with their left-arm pace and it wasn’t until the fourth over that they scored their first boundary of the innings.

However, they sunk further with Wiese snaring the wicket of Craig Wallace as Scotland finished the Powerplay on 22/4.

Michael Leask and Matthew Cross batted smartly to steady the ship, though boundaries were hard to come by, given their cautious approach. Leask scored two boundaries out of Scotland’s three in the first 10 overs, taking on Wiese both times.

After the drinks break, Leask took the attack to Michael van Lingen, smashing him for a four and six. The 39-run partnership finally came to an end, with Frylinck cleaning up Cross with the slower ball.Play VideoPlayMuteLoaded: 42.39%Remaining Time -0:23Picture-in-PictureFullscreen

Chris Graves joined Leask at the crease and with Scotland going at just 5.1 runs per over, decided to accelerate the scoring.

Leask smacked JJ Smit over deep mid-wicket for six in the 13th over and Scotland scored a boundary in each of the subsequent three overs to take the run-rate to close to a run-a-ball.

However, Namibia bowled brilliantly at the death, starting with JJ Smit rattling the stumps of the dangerous Leask for 44. Mark Watt’s innings didn’t last long, holing out to captain Erasmus at long-on in the bid to up the scoring rate.

Chasing 110, Namibia chose to go with caution over aggression, choosing to take the game deep with wickets in hand.

In fact, it wasn’t until the fifth over of the innings that Namibia scored their first boundary off the bat, with Michael van Lingen breaking the shackles with two consecutive fours.

However, he fell in the next over trying to pull Safyaan Sharif over mid-wicket, only to find the leading edge to Berrington at cover.Play VideoPlayMuteLoaded: 35.88%Remaining Time -0:27Picture-in-PictureFullscreen

Zane Green and Craig Williams tried to up the ante once the spinners were introduced after the Powerplay but the former fell at the stroke of drinks, with Munsey taking a good tumbling catch at long-off.

At the halfway stage, Namibia needed 54 from the remaining 10 overs.

Wiese, Smit get Namibia across the line after scare

Scotland managed to claw their way back into the game after the drinks break with two wickets in two overs.

Leask went through Erasmus’ gate from around the wicket and hit timber before Mark Watt dismissed the well-set Craig Williams, with wicketkeeper Cross affecting a smart stumping down the leg.Play VideoPlayMuteLoaded: 31.94%Remaining Time -0:31Picture-in-PictureFullscreen

At 67/4, David Wiese and JJ Smit, both new to the crease, applied themselves and nudged singles and doubles to calm the Namibian dugout after the two quick wickets.

With the equation down to 35 off 36, Smit hit a four as soon as Safyaan Sharif was back into the attack. He then smacked Greaves for a six after the wrist-spinner erred in his length, serving a juicy full toss to Smit.

Wiese and Smith saw off Watt’s over but the former got greedy after smoking Leask for a six in the 18th over, going for another big hit, only to edge it to third.

With 7 needed off 12, Smit settled the nerves with a sweetly-timed drive through the covers for four and eventually finished the game off with a six to secure their first-ever Super 12 win.