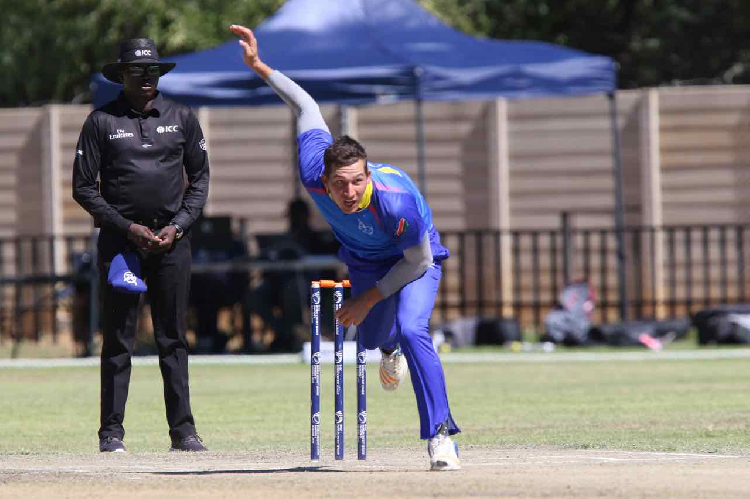 Smit was the outstanding player at the World Cricket League Division 2 tournament in Windhoek in April where he helped Namibia win the title after beating Oman in the final.

Smit also played a prominent role in his club Wanderers’ success as they won the Cricket Premier League 50 over title.

In the final they beat Windhoek High School Old Boys by seven wickets with Smit scoring 50 not out and taking two wickets for 38 runs.

Smit’s success also brought him international recognition as he was signed up by the Vancouver Knights for the Global T20 Canada tournament which starts at the end of this month.

Karl Birkenstock won the Most Improved National Men’s Player award, as well as the Raymond van Schoor award for his hard work and positive attitude.

Kayleen Green won the Senior Women’s Cricketer of the Year award after helping Namibia reach the final of the Africa Women’s T20 Qualifiers in Zimbabwe in May.

She was also Namibia’s most economic bowler in all matches for the senior women’s side with an economy rate of 4,04 runs per over, while she took 21 wickets at an average of 9,85.

Mercely Dantago won the Women’s Junior Player of the Year award after scoring 78 runs and taking 12 wickets in the league.

The national men’s coach Pierre de Bruyn won the Coach of the Year award after guiding Namibia to the WCL Division 2 trophy while they also won the Africa T20 Qualifiers in Uganda. Namibia also won One Day International (ODI) status for the first time since 2003 and won their first ODI match this year against Oman. The national men’s team also won the Spirit of Cricket Award.

As a player, Pieters represented Windhoek High School and Centaurus as well as South West Schools in 1960.

After school he mostly played for Wanderers Cricket Club, although he also had stints with Walvis Bay and Police.

His administrative career started in 1984 when he qualified as an umpire and four years later he became the representative of the Cricket Umpires Association on the Namibia Cricket Board (NCB).

The following youth awards were handed out:

Under 19 Player of the Year: Divan La Cock.

Under 17 Player of the Year: Kyle Saunders.

Under 15 Player of the Year: Renier Bosman.

Under 13 Player of the Year: Jack Brassel.

Numerous awards were also presented to the winning teams and top individual performers in the different formats and leagues of Namibian club cricket.