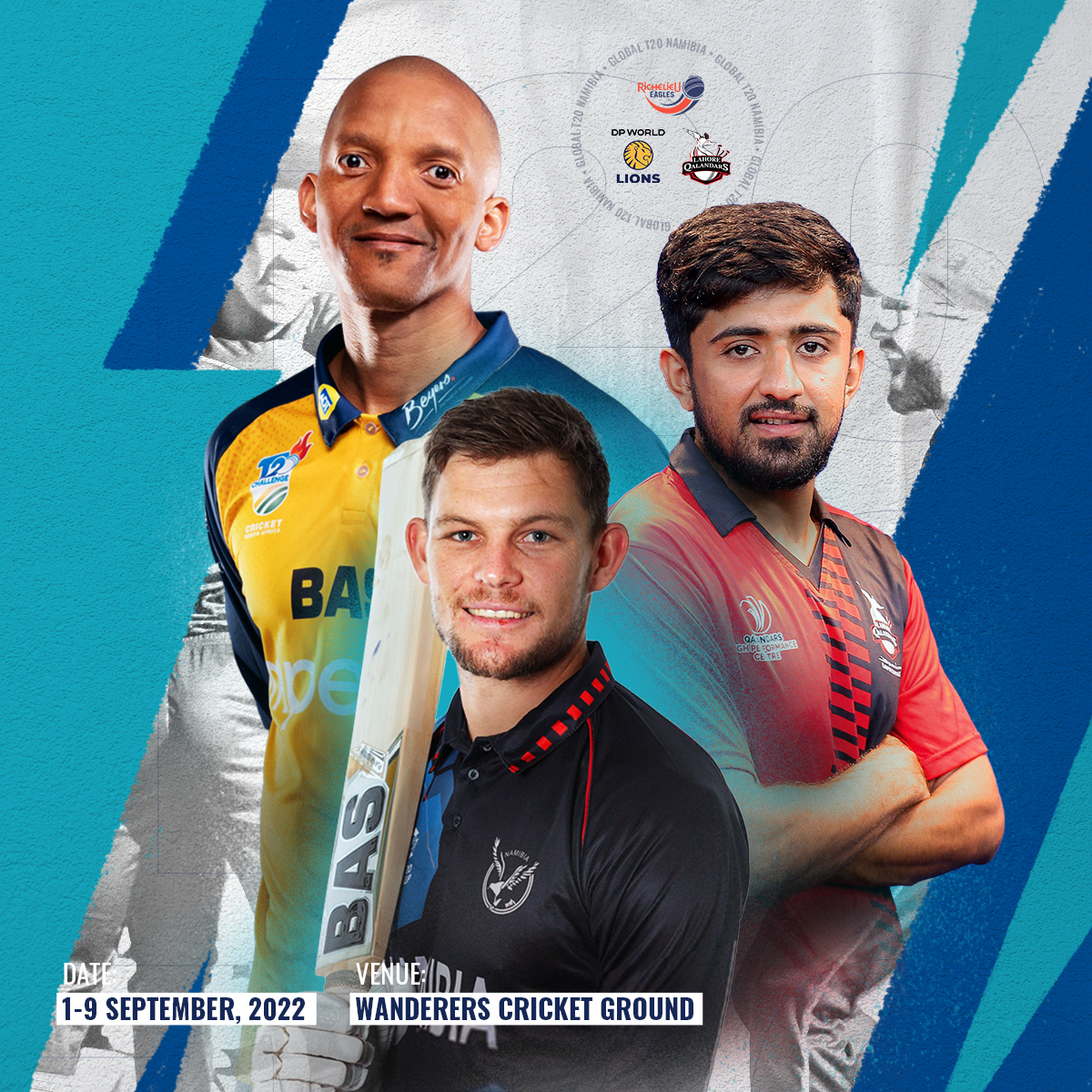 Namibia’s men’s national development team, Richelieu Eagles, will take on some of the biggest names in domestic and franchise T20 cricket at the inaugural Global T20 Namibia in Windhoek from 1-9 September.

Each team will play the other twice in the Global T20 tournament, with the top two sides then meeting in the final on 5 September. Following the T20 matches, Richelieu Eagles will then meet Lahore Qalandars in two 50-over games on 7 and 9 September.

The double header on Sunday, 4 September will be APS Pink Day, bringing together the entire Namibian community to raise both awareness of cancer and money in support of charities fighting the disease in the country.

Fans will be encouraged to show their support by sharing #Pledge4Pink on social media and to dress up in pink as Lahore Qalandars take on DP World Lions in the morning and Richelieu Eagles close out the day against their South African neighbours in the evening.

For host nation Namibia, the Global T20 Namibia will serve as perfect preparation for their ICC Men’s T20 World Cup campaign that starts the following month. It also kicks-off an exciting period for cricket in the country, with Namibia co-hosting the 2027 ICC Men’s World Cup alongside neighbours South Africa and Zimbabwe.

“We are extremely excited to announce this tournament. We believe there is value in a team-based tournament creating the platform for future stars to be seen,” said Cricket Namibia CEO, Johan Muller.

“Inviting top domestic teams from prominent cricket nations will attract high domestic and international interest while delivering quality on-field entertainment. The purpose of the tournament is to aid our player development, World Cup preparations and player exposure, while creating a commercial product.”

Three talented teams head to the Global T20 Namibia, which has placed its emphasis on talent development and allowing future stars the opportunity to be test themselves against the best opponents from around the world.

Lahore Qalandars COO, Sameen Rana, added: “We’re thrilled to be part of the inaugural Global T20 Namibia and our thanks go to Cricket Namibia for making this unique tournament a reality. We enjoy a special relationship with the country and its cricket fans thanks to David Wiese’s integral role in helping us win our first Pakistan Super League trophy earlier this year and we can’t wait to see everyone in Windhoek.

“This historic first edition will allow our young players to continue their development against two excellent teams. The opportunity to test their skills against this quality of opposition in different conditions to what we’re used to will only improve their cricket.”

Responsible for producing some of South Africa’s greatest talents in recent years, the Johannesburg-based DP World Lions have the likes of current Proteas limited overs captain Temba Bavuma and fast-bowler Kagiso Rabada in their ranks when they compete domestically.

Their conveyor belt of talent production has seen them crowned champions of South Africa’s four-day, 50-over and T20 competitions.

“We’ll be up against some tough teams which will no doubt serve us well for the domestic season ahead and be an amazing experience for all of our players. Our excellent relationship with Cricket Namibia continues and the fact that they are uniting these three teams from three different nations – was a major drawcard for us at Lions Cricket,” said DP World Lions CEO, Jono Leaf-Wright.

“It’s incredibly motivating for us to be able to represent South African cricket on a global stage and we want to make the country proud by showcasing everything that makes the Pride of Jozi such a special team – our spirit, our brand of cricket, our integrity and our diversity. We will, as always, strive for the all-important win and look forward to bringing our brand of excellence to the tournament.”