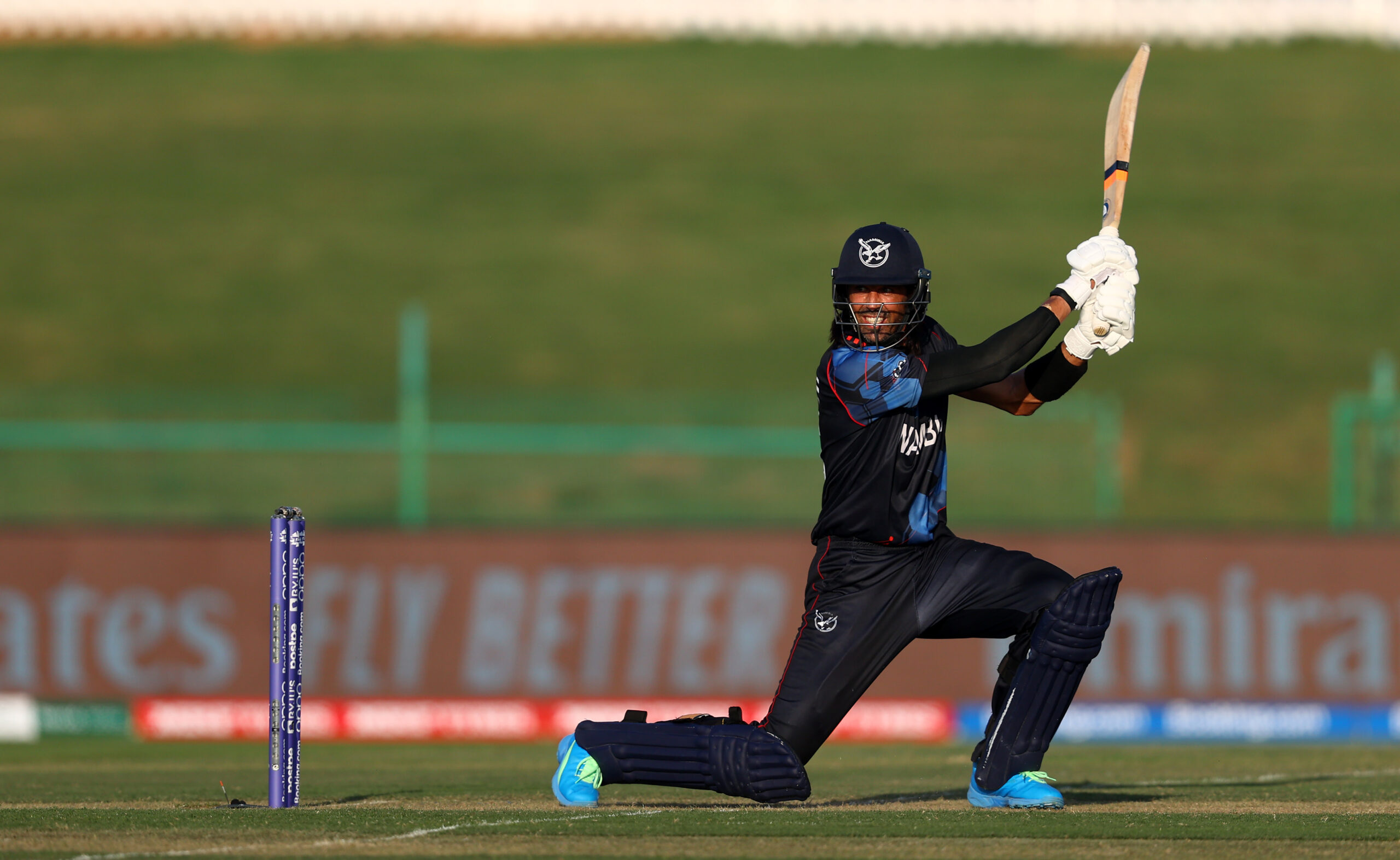 Namibia got their first points of the ICC Men’s T20 World Cup 2021 to keep their hopes of making it to the Super 12 stage alive.

David Wiese smashed five sixes in an unbeaten 66 off 40 balls as Namibia overcame a mid-innings stutter to overhaul a target of 165 with six wickets and six balls to spare.

The Netherlands, despite a second consecutive half-century by Max O’Dowd, find their campaign in tatters after two losses in as many games.Play VideoPlayMuteLoaded: 2.91%Remaining Time -5:37Picture-in-PictureFullscreen

In the 10th over, Namibia were three wickets down and had two new batters at the crease in Wiese and Gerhard Erasmus. However, the duo refused to go on the defensive.

Roelof Van der Merwe was taken for two sixes – of which Wiese’s went straight down the ground – in an over that cost 16 runs. Colin Ackermann conceded 19 as Wiese again went over the bowler.

Wiese’s fifty came off just 29 balls – fittingly with his fourth six of the day, this one over cover.Play VideoPlayMuteLoaded: 39.94%Remaining Time -0:24Picture-in-PictureFullscreen

The Netherlands had little answer to Wiese’s ball striking. While they managed to send back Erasmus and Fred Klaassen bowled a tight spell at the death, JJ Smit completed the formalities for a famous win.Play VideoPlayMuteLoaded: 42.22%Remaining Time -0:23Picture-in-PictureFullscreen

Namibia openers use their feet

The Wiese innings turned a game that had been keenly balanced till then. The Namibia openers had got off to a steady start, before the Netherlands were rewarded for attacking the stumps.

In the second over of the chase, opener Zane Green began with back-to-back fours off Colin Ackermann, bringing out the sweep and the reverse sweep. That set the tone for the Powerplay.

Stephan Baard used his feet well, walking across the stumps to open up the leg side. He survived a run-out chance and made Netherlands pay with a boundary the very next ball.Play VideoPlayMuteLoaded: 42.28%Remaining Time -0:23Picture-in-PictureFullscreen

Getting to 41/1 in the Powerplay, Namibia kept pace with the Netherlands.

The reintroduction of Klaassen got the Netherlands a much-needed breakthrough, as Green chopped on to his stumps. Craig Williams and Baard then fell in back-to-back overs, both undone by spin.

But with Wiese and Erasmus in the middle, Namibia were still in the hunt.

Earlier, put in, the Netherlands adopted a more positive approach to their batting as compared to their previous game. Stephan Myburgh came in for opener Ben Cooper and was one of two changes in the side.

Myburgh and O’Dowd welcomed Wiese with a couple of fours in the second over. O’Dowd then pulled a short ball from Ruben Trumpelmann for six, before following it up with a lofted four down the ground.Play VideoPlayMuteLoaded: 31.33%Remaining Time -0:31Picture-in-PictureFullscreen

Van der Merwe, who was promoted to get some quick runs, showed his intent with a reverse-swept four. However, he was caught in the deep without adding much more, giving Wiese his first wicket.

Clever with their lines, the Namibia bowlers also used the slow bouncer to good effect. At the halfway mark, the Netherlands reached 69/2 and the innings was keenly balanced.

O’Dowd’s knock was the core of the Netherlands innings. He was involved in a steady opening stand of 42 in 34 balls, before battling heat and exhaustion to add 82 for the third wicket.

Struggling in the heat of Abu Dhabi, he faced several run-out chances if the Namibian fielders had hit the mark. However, he did well to move his feet, find the gaps and keep the scoreboard ticking.