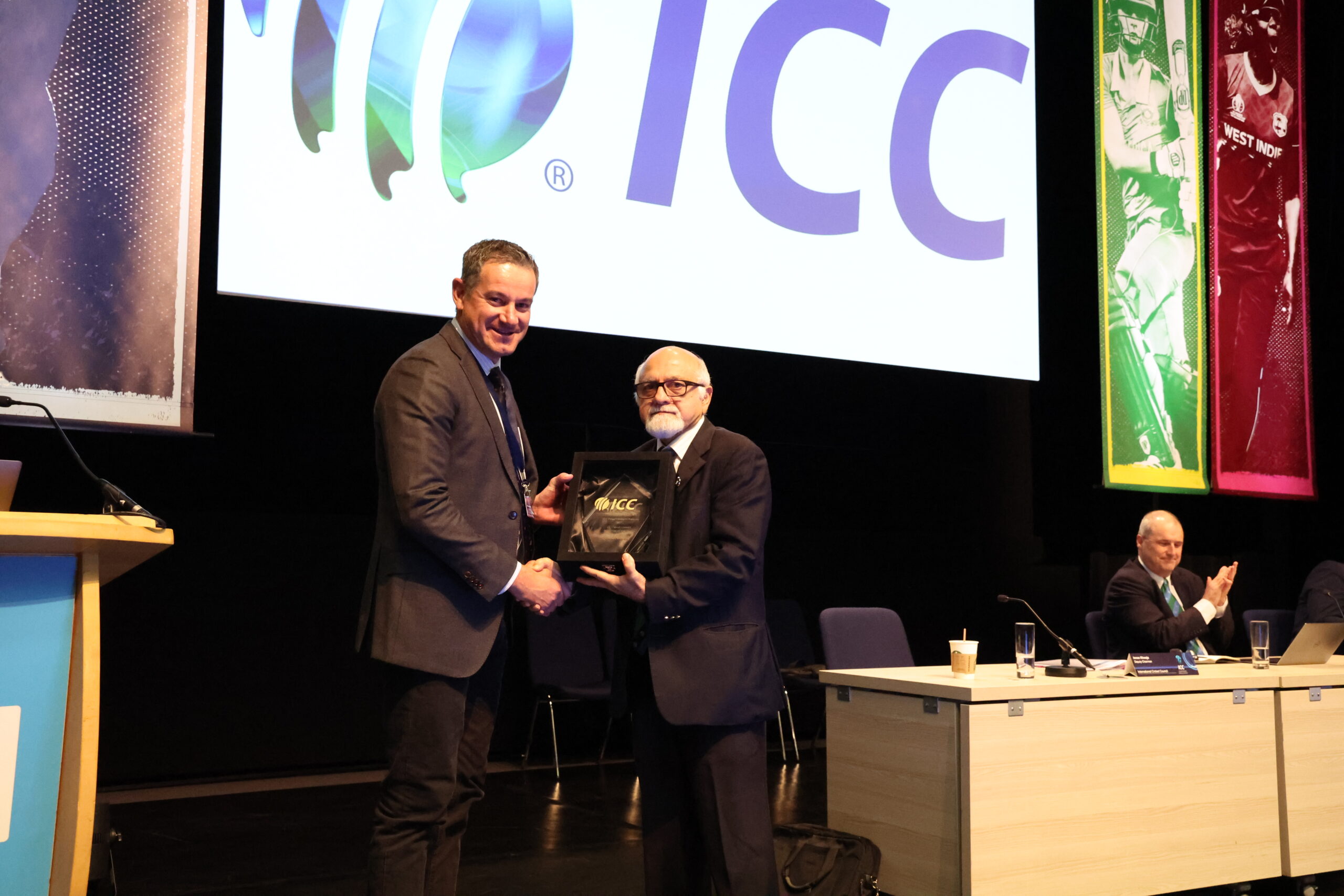 The International Cricket Council hosted a five-day ICC Annual Conference in Birmingham, UK,  from the 23rd – 28th of July 2022. The conference was  attended by 107 countries to discuss the upcoming events in world cricket. Good governance and optimized performances are factors that have been continuously putting Cricket Namibia on the global map. We are proud to have been represented by Cricket Namibia (CN) Chief Executive Officer, Johan Muller and President, Dr. Rudie van Vuuren who were presented with two  awards by the ICC. CN received the Development Initiative of the Year, and Associate Member Men’s Performance of the Year Awards.

Cricket Namibia is fortunate to have a support system that has played a major role in the turnaround of cricket in our country. Cricket Namibia Patron, Francois Erasmus, who happens to be one of cricket’s biggest fans, was honoured and awarded in absentia by the ICC for Lifelong Service to Cricket. We are proud to have a passionate Patron that has been working with the Board of Directors in reaching the ultimate goal; “To be a globally competitive, professional, values based and inclusive sport of choice.”

Growing international value and global exposure are important elements for Cricket Namibia. Our national men’s team, The Richelieu Eagles, have been resilient and courageous, which has taken them to the global stage to compete at the ICC Men’s T20 World Cup 2021 in the United Arab Emirates. The Eagles were one of the ICC Men’s T20 World Cup’s great inspirers, progressing from the first round of the competition, to then go toe-to-toe with some of cricket’s heavyweights.

The ICC Associate Member Men’s Performance of the Year Award and recognition is based on the team’s performance at the T20 World Cup. Cricket Namibia CEO puts the World Cup results into context: “Playing against Sri Lanka (at the start of the World Cup) we were completely outplayed by a high-quality team, which was a good thing because it showed us the pace and the standard of the competition.  Thereafter, we  had a really good win against the Netherlands. Facing Ireland was not just a game. It was qualification for the Super 12, it was playing against a full member country, and it was also automatic qualification for the 2022 World Cup, which just made the pressure and the expectation of that one match so much higher.”

The growth and accessibility of cricket in our country have Namibia leading top in Africa with high involvement cricket numbers which include playing cricket in the streets, at the beach and cricket played in back yards. Dr. Rudie van Vuuren explains: “The COVID-19 pandemic resulted in lockdown restrictions for individuals across Namibia, including the closure of schools, which demanded a creative solution to keep the cricket program running in our country.” Cricket Namibia is proud of working towards the vision to be an inclusive Namibian sport of choice, as 67 000 children across Namibia have been exposed to the game of cricket through the Ashburton Kwata Cricket program, and have now become part of the cricket dream.

Being recognized by the ICC with such a prestigious awards is an honour and motivation to always keep flying higher. We are proud to be a part of this cricket dream and to represent Namibia.