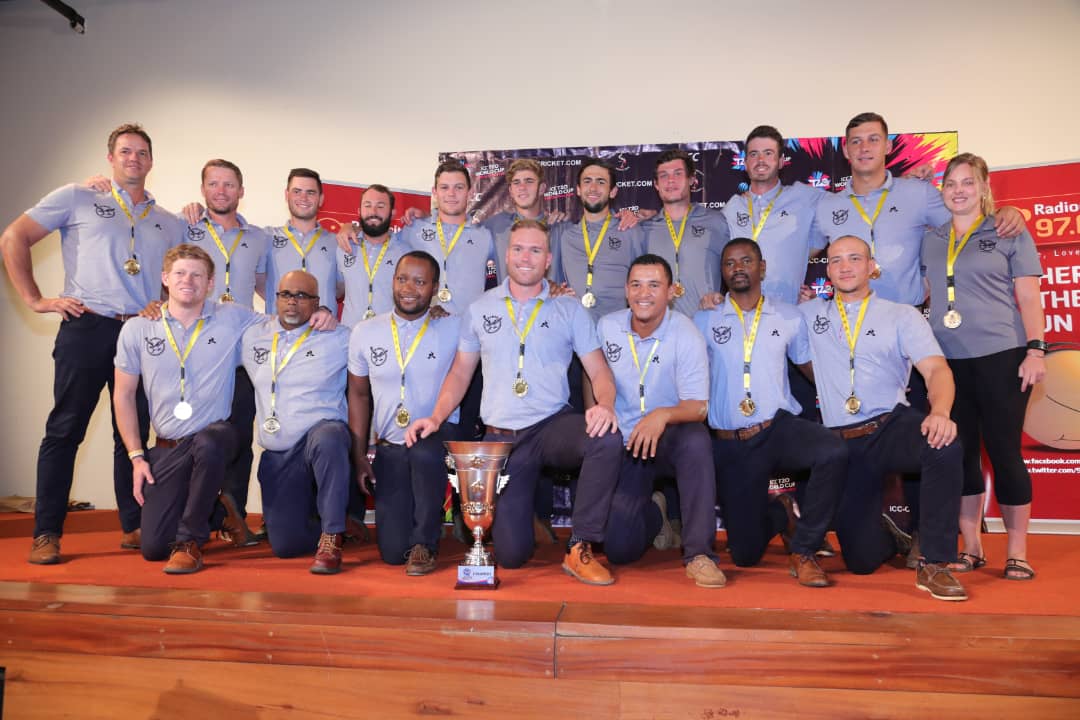 Namibia participated in The ICC T20 World Cup Africa Finals which was hosted in Uganda. Evergreen Uganda was blessed with so much rain during the tournament but that did not get in the way of Cricket Namibia coming out victorious as they walked away with the trophy.

It was expected that the conditions would be a major challenge for the squad, but they adapted very well to the low wickets they played on and the tough outfields.

Playing against Kenya was one of the biggest games we were all looking forward to, it would have been a good game to watch and for the players to experience as Kenya gained ODI status way before Namibia did. It was unfortunate that the rain did not make it possible for The Squad to play against Kenya and Nigeria. The Eagles built up a lot of momentum over the last few months and had the confidence of beating any team at the tournament, so it would have been nice to play and win the gold medal resoundingly.

It was a disappointing campaign for the Cricket Cranes as they had the advantage of playing on their home ground and they did not perform well in a format they thought they are good at – Twenty20. Uganda was a lovely host. It was, however, a shame that the tournament was interrupted badly by rain which affected 50% of matches.

Head Coach, Pierre de Bruyn was pleased with the game played against Botswana and he says that it was “key” for him and that the team thrives on the fact that if they want to beat teams, then they beat them convincingly. The match played against Botswana was ruthless and lasted only for 36 minutes. This was a great platform for The Eagles to send out a message not just in Africa, but in world cricket that Namibia wants to compete very well against any team.

Cricket Namibia set goals in April to get ODI status and perhaps qualify in top 4 and we won the tournament against big teams such as PNG, Hong Kong, Canada and the USA. Namibia is now set to participate in the ICC T20 World Cup Qualifier in Dubai and it will be a challenge for The Eagles. The Captain says that they will regroup and build up a new momentum when the new season starts, with their first ODI tour to the USA in September and then hopefully be in a good space to achieve more great things in the T20 qualifiers in November. He says that the team will take it step-by-step, continue to improve and play consistent cricket. Playing in Dubai will not be easy, all players will need to be aware of what is required to play in the T20 World Cup, improve their skills and put in the extra effort to get one of the 4 spots in the last 6 teams.

There is an opportunity for Cricket Namibia to stake a claim and for young men to announce themselves on the world team which could open doors for our cricket players. The biggest contribution to Cricket Namibia winning in the tournament held in Uganda is that the team was well prepared and that is what put The Eagles apart from the other teams. Cricket Namibia has been working hard to achieve what we have gained thus far and the wins in every game we play are the manifestation of the talent Namibia has.

“We will win games, lose games but we will always have room for improvement”