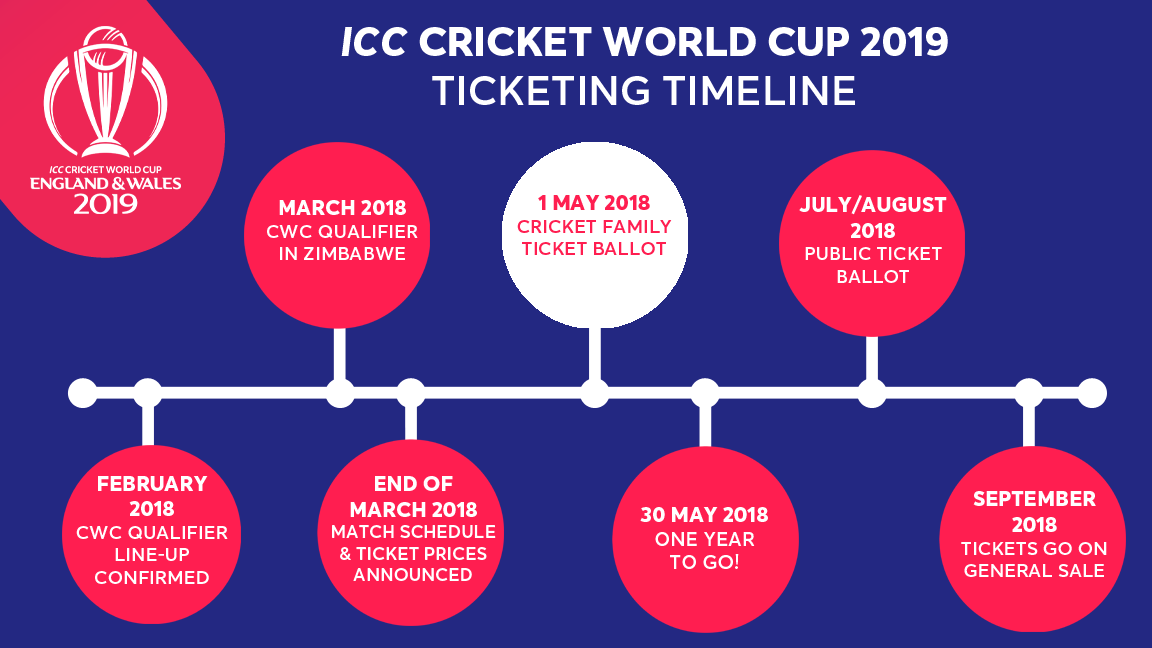 Tournament Director, Steve Elworthy, said: “With demand expected to be high, we are providing a priority ballot opportunity for the cricket family all over the world to apply for tickets. Our ticketing strategy has been designed to reward the players, coaches, umpires and supporters who make up the cricket family via priority access. This promises to be the greatest and most inclusive ICC Cricket World Cup ever as we prepare to not only welcome people from around the United Kingdom but also all over the world.”

All those who have registered their interest by 30 April 2018 will go into the ballot for the highly sought-after tickets as the ICC Cricket World returns to England and Wales for the first time in since Australia’s victory back in 1999. The results of the cricket family ballot will be announced in June 2018.

Next year’s tournament, which will feature 10 teams across 48 matches between 30 May and 14 July, will be the fourth time England & Wales have hosted the global event.

Organisers are warning that they are expecting an overwhelming response to the 1 May  ticket ballot based on the record numbers that attended last year’s ICC Champions Trophy in England and Wales and the unprecedented demand for tickets for the ground-breaking ICC Women’s World Cup which was also staged in conjunction with the ECB.

Cricket fans unsuccessful in the May ballot will have a further opportunity to access tickets by automatically being entered into the public ballot which will be launched in July 2018, whilst in September this year any remaining tickets will go on sale on a first come, first serve basis, exclusively at cricketworldcup.com. A ticket re-sale platform is also planned for fans that will launch at a similar time this autumn.

Mr Elworthy continued: “The unique atmosphere at matches across England and Wales is created by the fact that every competing team has strong support across the local communities and want to watch their heroes play at some of the most famous grounds in world cricket.”

“So our message is clear. If you want to be a part of the cricket family priority ticket ballot in May, you must register now so that you don’t miss out.”

The final two teams to join hosts England and holders Australia, along with Bangladesh, India, New Zealand, Pakistan, South Africa and Sri Lanka will be decided at a qualification tournament in Zimbabwe. During March, 10 teams will go head to head to see who takes the prized spots.

After the ICC Cricket World Cup qualifying tournament concludes in Zimbabwe on 25 March – from which the final two qualifiers for the 2019 event will be known – the match schedule and ticket prices will be announced.