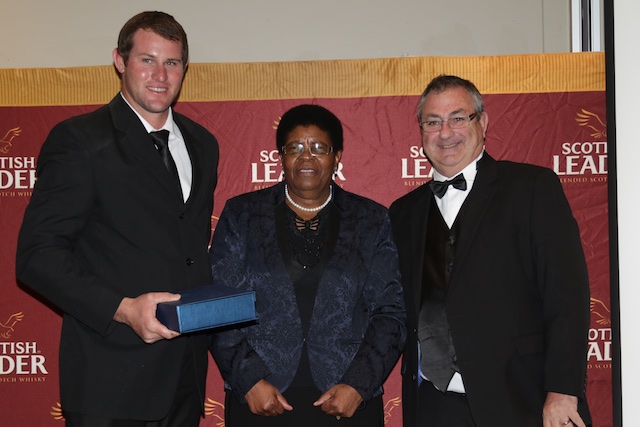 BERNARD Scholtz capped a great season by winning the Player of the Year award at Cricket Namibia’s annual awards ceremony in Windhoek on Saturday evening.

At a swanky reception at the Hilton Hotel, Namibia’s cricketing fraternity were dressed up to the nines to honour their top players and administrators after a year of highs and lows on and off the field of play.

On the field of play Namibia’s u19 cricket team excelled at the u19 Cricket World Cup where they beat South Africa and eventually finished seventh overall to gain automatic entry to the 2019 u19 Cricket World Cup in New Zealand. But off the field, Namibia’s cricketing fraternity, and the international cricketing fraternity at large, was rocked by the untimely death of star player Raymond van Schoor after a stroke in November 2015.

Van Schoor was remembered and in an eloquent speech the guest speaker, former Kenyan all-rounder Martin Suji paid tribute to Van Schoor and handed his father, Melt, a traditional Maasai cloth. “This guy could bat, he could bowl, he could run and dive, and he was humble. If Namibia’s youngsters can follow his path, Namibian cricket will go far. He’ll always have a lion’s heart – Kenyans loved him,” he said. Cricket Namibia president Richard Frankle said it was a night of celebration but also a time of exciting change for cricket in Namibia, and announced that the board had co-opted Elize Petersen and Justus Hausiku to Cricket Namibia’s executive committee.

“Elize Petersen is head of international affairs at Air Namibia and Justus Hausiku is the executive chairman of the Arch Group of Companies. They don’t know much about cricket, but they know a lot about good business practises and have very impressive CV’s. Cricket Namibia is embarking on a journey which I believe will take us places where we have never been before, and they will help us reach this goal,” he said. Frankle also announced that the deputy minister of sport, Agnes Tjongarero had agreed to become Cricket Namibia’s patron, saying that the whole cricketing community was very excited by it. Frankle thanked everyone involved in cricket on ‘a job well done’ – from the umpires, scorers and groundsmen, to the players, coaches, administrators and parents, as well as the sponsors of Namibian cricket. Tjongarero congratulated Cricket Namibia on its achievements, especially the u19 team’s performances at the Junior World Cup, but urged Cricket Namibia to take the game to all corners of the country.

“Sport in Namibia must be played in all 14 regions of the country. The kids in the rural areas will not know what cricket is unless someone shows them… We must take cricket to the furthest schools in Namibia, and then, I assure you, we will find more competent cricketers,” she said.

Scholtz won the Player of the Year award after a great season at home and abroad.

He took 59 wickets across all formats of the game and excelled at the T20 World Cup Qualifiers in Ireland where he won the Player of the Series award after taking 14 wickets at an average of 11,00.